Jeff Greene, President of JGLC and Greene Transport Company, and his son Chase Greene, Vice President of both companies have worked side by side for 9+ years and counting. 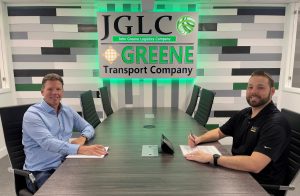 But before that, Jeff was working side by side with this father, John J. Greene who founded JGLC in 1962.

Jeff remembers going up to Perry, Georgia during the summer in high school with his dad, where he would teach Jeff about his logistics and transportation business. His father, John rented his first office, which was in an upstairs area of a truck stop in Georgia. Jeff was given a phone, rolodex, and a check book on his first day of work at his dad’s business. He remembers his dad saying, “Call the trucks and tell them the season is starting, these are the set rates per mile, and this is where we need them to go.” 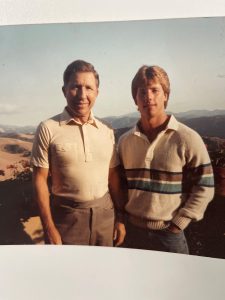 That is when Jeff got his first taste of the business. Now, Jeff has the pleasure of working with his son, Chase. Jeff says, that having his son in the workplace has taken a lot of stress of his plate and Chase has really taken off as the VP of the company. Jeff has noticed how well him and Chase balance each other out and enjoys having his son by his side in the office.

Chase Greene says, “Working with your father can be challenging at times, however being able to have this extra time to spend together is something I am grateful for.”

JGLC and Greene Transport Company has remained family owned and operated for 60 years and is still going strong. We want to wish Jeff and Chase Greene, along with our JGLC and GTC Dads, a very Happy Father’s Day.

GET THE LATEST NEWS ON JGLC STRAIGHT TO YOUR INBOX